Once upon a time, in a land where chaos and insanity reigned supreme above all other human values, three dunces set out across a deserted plain following the star which signified the birth of our lord and savior, Jesus Christ. When they arrived at the town of Cleveland, they were dismayed to find that it was not a star at all, but was, in fact, the flickering sign of the downtown Denny’s breakfast all-day restaurant, and the dunces saw it, and said, “aw, what the heck!” And the hash browns were “pretty good.”

In this epistle, the dunces recount their journey from awkward childhood, through awkward adolescence, and onward into awkward adulthood. Please enjoy, and like comment subscribe to my channel, and back the patreon.

We’re back, and we’re here to berate you about those current events in the world that you’ve so desperately tried to ignore. But perhaps we bring lightheartedness to the doom and gloom of your everyday existence!

This week, we discuss some more video games, INSIDE, ABZÜ

“Shockwave” from the INSIDE Soundtrack, by Martin Stig Andersen and SØS Gunver Ryberg

“And the Earth Did Not Yet Bear a Name” from the ABZU Soundtrack, by Austin Wintory

Since I’ve been working on this Witness video essay for so long, I figured I should probably give a bit of a status update to all my backers. At the very least so nobody worries that I’m not actually working on this thing.

Thus far, the hardest and most time consuming thing has been writing and finalizing a script. I initially thought this whole video was going to be a short month-long project, and that one month has turned into 6. There have been a lot of factors leading to this essay taking so long to get done, but certainly one of them is just that it’s difficult try to properly communicate in words what The Witness does so effectively without them. Much as Richard Feynman said of attempting to lecture about physics to the layman: I more or less have to accept failure before I even begin, but proceed anyway.

Still, the video is coming along pretty well. I have 4 and a half minutes of more-or-less final video cut together already, 5 and a half minutes of finished and recorded VO that needs to have video edited to go alongside it, and also there are around 10 minutes left of words (2108 words) that are sitting in a text file that need to be polished up before they can become the rest of the VO for the video.

I have been working on the video in sections: writing the script for each section, recording the VO, and polishing the video before moving on to the next. I have around 3 of 6 sections done.

So, the progress is pretty good, and although it may seem from the numbers like I’m at the halfway mark, I feel like I’m a bit further along than that, as most of the core ideas that I want to cover are already in the script. That means rather than wracking my brain for days, it really is just a matter of polishing up what I have.

Anyway, thanks for backing, and I hope everyone enjoys the final video when it is done.

This week, in our most devilish episode yet (haha, numerical puns), the VanDevander brothers have a few questions for Jamie after she has spent some time immersed in The Witness.

I would suggest not listening to this podcast until you have played a significant portion of The Witness, however there is a spoiler warning before we really dive in. 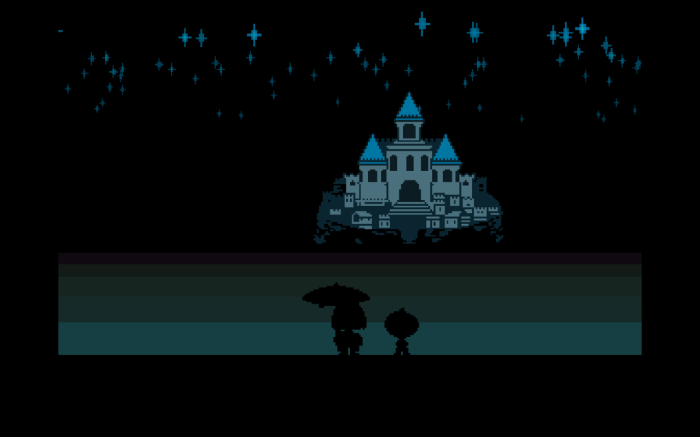 I’m not sure what to do about Undertale. I have gotten multiple requests to write some kind of piece or video about it. I obviously want to do things that my backers want and request sometimes, but I also am a bit torn about doing in-depth work about games that I don’t particularly like. (Way to not bury the lede.)

I suppose I should preface all of this by saying that I have not actually played Undertale and am perhaps still open to the possibility that there is some great aspect of the game that I am just not getting. I did play the demo version of the game that was released way back in 2013 ( a full two years before the final release), which consists of a somewhat less developed version of the start of the final game, and I have watched a decent chunk (the first 4-5 hours) of the release version being played by my brother.

So, I don’t offer my opinion as coming from some place of authority about the game. This is really just more of a rant. I would obviously make a further effort to play the game if I were doing a real in-depth analysis piece.

I feel like, generally speaking, it isn’t my thing. The core value proposition of the game is its humor. Not really the story per-se, as the plot itself is pretty threadbare, mostly proceeding from one non-sequitur anecdote to another. And although it’s a genuinely funny and charming game, there have been lots of other genuinely funny and charming games over the years, including the game that Undertale so clearly borrows its aesthetics from: Earthbound.

Earthbound is a game I heard people raving about for so long that I decided to check it out a few years back. My conclusion there is much the same as it is with Undertale: It’s a clever game, with some genuinely effective humor and quirky characters. Earthbound in particular had some quite innovative design decisions in the genre for its time, but my overall experience with Earthbound was that once I put it down, I didn’t feel very compelled to pick it back up. The game seemed overly long, as most JRPGs are, and the humor felt stretched a bit thin.

On the plus side, Undertale appears to be a much shorter and digestible game than Earthbound, but mine and my brother’s continued thought when watching him play through it (which he says persisted through the rest of the game that he has played), was “this is fine, but is it ever going to blow my mind?”

And yes, I know about the replayability factor of the game, and how the choices that you make in combat or even by reloading earlier saves affect how characters react to you, but there’s really nothing about what’s already there that’s making me starve for more of it.

Frankly, it’s hard for me to see why anybody is that crazy about the game.

So, let’s talk about the hype for a second, because I feel like Undertale may be one of the most unfortunately over-hyped games ever. That’s a bold statement, but we’re talking about a game which was literally voted “Best. Game. Ever.” by a community of enthusiasts at GameFAQs, in the year it came out. Perhaps I shouldn’t take that award’s merit too seriously, but it’s fair to say that a lot of people really were crazy about this game.

The other question about hype in general: is hype the fault of the game? I think this question is particularly salient if, as in the case of Undertale, it’s word-of-mouth that lead to such astronomical popularity. It’s not as though Toby Fox was out promoting the game left and right. He certainly wasn’t on stage at Sony press conferences at multiple E3 like some other unfortunately over-hyped game that was released this year. I have never even seen Toby Fox’s face, and the most promotion I saw for the game pre-release was the demo, which I don’t even remember where I found.

So I think in this particular case at least, the answer is no. It’s not Undertale’s fault that it was over-hyped. Perhaps it would be much easier for me to appreciate it for what it is if it weren’t being heralded from the heavens. It is certainly a cute and funny game with clever twists on classic Dragon Quest style combat. It also makes a solid effort to offer the player a sense of freedom about how they approach situations in the story, even if many of your choices are seemingly as binary as “murder” or “not murder.”

I’d like to go back and talk about the aesthetics of the game. Simply put, I find Undertale to be an ugly looking game. Apart from a few scenes which were not illustrated by the game’s sole author Toby Fox, most of the time the game looks like an early NES game. It’s a similar style to Earthbound, but it honestly looks much worse than that. Thankfully the music is catchy and usually appropriate alongside the story scenes of the game. But overall, the game is not selling itself to me on aesthetic.

Aesthetics perhaps are overvalued by myself and our culture at large, what with plastic surgery and celebrities and all, but it definitely makes an impact on how much I want to play a game.

I’m not sure that I’ve really done much of use here other than rag on a game that I haven’t even played, but it’s been rolling around in my mind for a bit and there’s certainly a couple thoughts that I think are interesting to think about, in terms of what it is that one person likes about a game versus what another person dislikes. People have wildly differing tastes in the media that they consume, and that’s great. I would never want to tell someone that they are wrong if they really do think that Undertale is the best game ever. It’s just hard for me to see why they feel that way, and I hope that they can appreciate that.

David went to the Biltmore. Matthew is going (has gone now) to HandmadeCon 2016, and Jamie went on a mission trip. Let’s try to talk about it!

This week on the cast, it’s a full house again. David regales us with stories of his custom pen-and-paper role-playing system as well as the fantasy worlds he has shepherded since he was a teenager.

Matthew decides to ask Jamie about some of her formative experiences with interactive entertainment and becomes very confused by red and blue pipes.